From Altcyclopedia
Jump to navigation Jump to search
This article is about the train operating company in the United Kingdom. For other uses, see Cross Country.

CrossCountry (legal name XC Trains Limited) is a train operating company in the United Kingdom owned by Arriva UK Trains, operating the New Cross Country franchise. It operates intercity and other long-distance trains across the country, but does not serve Greater London. It operates the UK's longest direct rail service from Aberdeen in the north-east of Scotland to Penzance in the south-west of England. It is one of only two franchised train operating companies that does not operate any stations, the other being Caledonian Sleeper. All routes call at or terminate at Birmingham New Street.

In June 2006 the Department for Transport announced its intention to restructure a number of franchises. The changes created a 'New Cross Country' franchise that would incorporate the existing InterCity Cross Country franchise run by Virgin CrossCountry, without the West Coast Main Line services (with the Birmingham to Scotland services transferring to Virgin Trains West Coast and the Manchester to Scotland services transferring to First TransPennine Express). Some services from the Central Trains franchise were to be added.

In October 2006 the Department for Transport issued the invitation to tender to the shortlisted bidders: Arriva, FirstGroup, National Express and Virgin Rail Group. On 10 July 2007 the department announced that Arriva had won the New Cross Country franchise, with the services operated by Virgin CrossCountry transferring to CrossCountry on 11 November 2007 along with the Cardiff to Nottingham and Birmingham to Stansted Airport services from Central Trains.

Transfer and withdrawal of services[edit source]

The tender did not require retention of the services beyond Guildford after December 2008, so the services to Gatwick Airport and Brighton ceased. As a result, all CrossCountry services now completely avoid Greater London.

From December 2008 a daily Nottingham to Bournemouth service was introduced.

From December 2010 a number of services from Newcastle were extended from Reading to Southampton.

From May 2011 a number of services were extended from Edinburgh to Glasgow to replace East Coast services.

Extension of the franchise[edit source]

Originally due to conclude on 31 March 2016, the franchise was extended until December 2019. An Invitation to Tender was to be issued in October 2018 for the next franchise, but in September 2018 the competition was cancelled to allow the recommendations from a report into the franchise system to be incorporated.

In July 2019 the Direct Award Franchise was further extended by a year (13 railway Reporting Periods), to end in October 2020.

In November and December 2017, CrossCountry on-board train managers and senior conductors affiliated with the National Union of Rail, Maritime and Transport Workers (RMT) staged five 24-hour and two 48-hour strikes in an industrial dispute regarding staff rostering, in particular in relation to working on Sundays. Further strikes were planned for January 2018, however, these were cancelled after CrossCountry and the RMT came to an agreement over staff working conditions on 11 January.

Separate strike action was later threatened by the Transport Salaried Staffs' Association (TSSA) union later that month, with strikes planned for 26 January. These were in relation to CrossCountry staff being offered a 1% pay rise, compared to a 3.3% pay rise for staff at other Arriva-owned train operating companies. The planned industrial action by the TSSA was later cancelled, after CrossCountry agreed to match their demands for an equal pay rise.

The company operates medium- and long-distance services that run outside of the London area. The network is centred at Birmingham, and all routes either terminate or pass through Birmingham New Street station.

As of December 2018, the Monday-Saturday daytime services, with frequencies in trains per hour (tph), include: 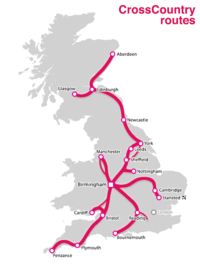 These services combine to provide higher frequencies on the following sections:

The Sunday service pattern is mostly similar to the weekday one, except that the hourly Birmingham - Nottingham services do not run while the other services do not start until late morning or early afternoon, and often have a slightly different stopping pattern. 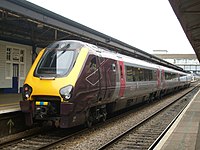 The above table shows the basic service pattern; however, a small number of these services are extended beyond their usual destination:

In December 2016, CrossCountry published a consultation document for changes to the timetable proposed to be implemented in December 2017. These included:

To allow these changes to take place, all CrossCountry services on some routes (which had a limited service) would be withdrawn and replaced with extra services run by other operators. These included:

In April 2017, it was announced the proposed changes would not be proceeding.

Stations served only by CrossCountry[edit source]

CrossCountry does not manage any stations. The following stations are served only by CrossCountry but are managed by other train operating companies:

Manea was only served by CrossCountry until 2013, when Abellio Greater Anglia started running one train every two hours at the station in addition to the CrossCountry services there.

Worcestershire Parkway Regional Interchange is currently under construction where the Cross Country Route intersects the Cotswold Line. It is being built on two levels, with the low level to be served by CrossCountry, and the high level by Great Western Railway.

To improve the travelling experience, CrossCountry has designated four stations as alternative changeover stations: these are Cheltenham Spa, Derby, Leamington Spa and Wolverhampton. Connection times can be shorter at these smaller stations. For example, passengers travelling from Cardiff to Edinburgh could change at Cheltenham – where both their trains use the same platform – instead of Birmingham New Street, which is a larger, more complex station. These four stations are marked on the CrossCountry route map, in yellow.

Retrieved from "https://altcyclopedia.miraheze.org/w/index.php?title=CrossCountry&oldid=2722"
Categories:
Hidden category:
Cookies help us deliver our services. By using our services, you agree to our use of cookies.