St Pancras railway station (/ˈpæŋkrəs/), also known as London St Pancras and officially since 2007 as St Pancras International, is a central London railway terminus on Euston Road in the London Borough of Camden. It is the terminus for Eurostar continental services from London via High Speed 1 and the Channel Tunnel to Belgium, France and the Netherlands. It provides East Midlands Railway services to Corby, Sheffield and Nottingham on the Midland Main Line, Southeastern high-speed trains to Kent via Ebbsfleet International and Ashford International, and Thameslink cross-London services to Bedford, Peterborough, Brighton and Gatwick Airport. It stands between the British Library, the Regent's Canal and King's Cross railway station, with which it shares a London Underground station, Template:Lus.

The station was constructed by the Midland Railway (MR), which had an extensive network across the Midlands and the North of England, but no dedicated line into London. After rail traffic problems following the 1862 International Exhibition, the MR decided to build a connection from Bedford to London with their own terminus. The station was designed by William Henry Barlow and constructed with a single-span iron roof. Following the station's opening on 1 October 1868, the MR constructed the Midland Grand Hotel on the station's façade, which has been widely praised for its architecture and is now a Grade I listed building along with the rest of the station.

By the 1960s, St Pancras was surplus to requirements and services were diverted to King's Cross and Euston but there was fierce opposition to its proposed closure and demolition of the station and hotel. The station was reinvented in the late 20th century as the terminal for the Channel Tunnel Rail Link in an urban regeneration plan across East London. The complex underwent a £800 million refurbishment which was opened by Queen Elizabeth II in November 2007. A security-sealed terminal area was constructed for Eurostar services to continental Europe via High Speed 1 and the Channel Tunnel, with platforms for domestic trains to the north and south-east of England. The restored station has 15 platforms, a shopping centre, and a coach facility. St Pancras is owned by London and Continental Railways (LCR) and managed by Network Rail (High Speed), a subsidiary of Network Rail.

St Pancras is at the southern end of the London Borough of Camden on a site orientated north/south, deeper than it is wide. The south is bounded by Euston Road (part of the London Inner Ring Road), and its frontage is the St Pancras Renaissance Hotel, while the west is bounded by Midland Road which separates it from the British Library and the east by Pancras Road which separates it from King's Cross station. The British Library is on the former goods yard site.

Behind the hotel, the train shed is elevated 5 m (17 ft) above street level and the area below forms the station undercroft. The northern half of the station is mainly bounded to the east by Camley Street, with Camley Street Natural Park across the road. To the north-east is King's Cross Central, formerly known as the Railway Lands, a complex of intersecting railway lines crossed by several roads and the Regent's Canal.

East side entrance from Pancras Road

St Pancras contains four groups of platforms on two levels, accessed via the main concourse at ground level. The below-surface group contains through platforms A and B, and the upper level has three groups of terminal platforms: domestic platforms 1–4 and 11–13 on each side of international platforms 5–10. Platforms A & B serve Thameslink, 1–4 connect to the Midland Main Line, while platforms 11–13 lead to High Speed 1; there is no connection between the two lines, except for a maintenance siding outside the station. There are also a variety of shops and restaurants within the station concourse. The station is the London terminus for Eurostar's high-speed trains to Paris, Brussels, Amsterdam and Lille via the Channel Tunnel. It is also the terminus for East Midlands Railway services from London to Derby, Leicester, Nottingham, Sheffield, and smaller towns en route. Thameslink trains on the cross-London Thameslink route call at platforms beneath the main station, south to Gatwick Airport and Brighton and north to Luton Airport Parkway for Luton Airport and Bedford. High-speed domestic services to Kent, run by Southeastern, depart on the same level as Eurostar & East Midlands Railway. 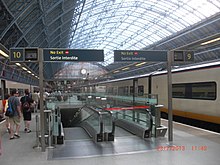 Arriving on one of the Eurostar platforms

The terminal is one of relatively few railway stations in England to feature multilingual signage in English and French. In March 2014, the station's public relations team commissioned a study of mispronounced words, reportedly as a result of passengers referring to the station as "St Pancreas". 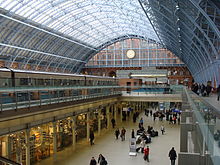 Interior of station, with Eurostar train awaiting departure at left

The longer international platforms, used by Eurostar, extend into Barlow's train shed, whilst the other platforms terminate at the southern end of the 2005 extension. The international platforms do not occupy the full width of the Barlow train shed, and sections of the floor area have been opened up to provide natural light to the new ground-level concourse below. Eurostar's arrival and departure lounges lie below these platforms, adjacent to The Arcade, a concourse fashioned from the original station undercroft which runs along the western length of the Barlow train shed. The southern end of The Arcade links to the western ticket hall of King's Cross St Pancras tube station.

Access to the East Midlands Railway platforms are via the northern end of The Arcade, while the Thameslink and domestic High Speed platforms are reached via a street-level concourse where the old and new parts of the station meet. The main pedestrian entrance is at the eastern end of this concourse, where a subway enables pedestrians to reach King's Cross station and the northern ticket hall of the tube station.

As of September 2018[update], the Monday-Saturday off-peak timetable has five services per hour: three fast and two semi-fast.

The Thameslink platforms serve trains to Bedford, Luton, St Albans City, Cambridge and Peterborough in the north, and Wimbledon, Sutton, East Croydon, Gatwick Airport and Brighton in the south.

The first domestic service carrying passengers over High Speed 1 ran on 12 December 2008, to mark one year before regular services were due to begin. This special service, carrying various dignitaries, ran from Ashford International to St Pancras. Starting in June 2009, Southeastern provided a preview service between St Pancras and Ebbsfleet, extending to Ashford International during peak hours. In September, Southeastern extended the peak-time services to Dover and Ramsgate. The full service began on 13 December.

During the 2012 Summer Olympics in London, St Pancras was the Central London terminus of the Olympic Javelin service, a seven-minute shuttle between Central London and Stratford International station for the London Olympic Park.

Seventeen pairs of Eurostar trains to and from Paris Gare du Nord every day, ten pairs of trains to and from Bruxelles-Midi/Brussel-Zuid for Brussels and the European Union de facto capital, and one train to and from Marne-la-Vallée for Disneyland Resort Paris. Extra services run to Paris on Fridays and Sundays, with a reduced service to Brussels at weekends. Additional weekend leisure-oriented trains run to the French Alps during the skiing season, and to Marseille via Lyon and Avignon in the summer. It also serves as the terminus for services to Amsterdam from Spring 2018. Trains call at a mix of four intermediate stations (Ebbsfleet International, Ashford International, Calais-Fréthun and Lille-Europe), with some running non-stop. Non-stop trains take 2 hours 15 minutes to Paris, and just under 1 hour 50 minutes to Brussels, other trains taking 5 or 10 minutes longer depending on whether they make one or two stops.

St Pancras International is one of four railway stations in the UK with juxtaposed immigration control facilities set up by the French Border Police to clear passengers for entry into France and the rest of the Schengen Area prior to boarding the trains. Passengers do not need any further immigration or passport checks after entering the main departure gates, or at the corresponding gate at the other end on return journeys, as they are cleared by the UK Border Force.

On 17 February 1918 a German Gotha aircraft dropped five bombs one of which destroyed the roof of the station's ornate booking hall and killed 20 people. The station was also bombed in World War II, including a parachute mine damaging the roof on 15–16 October 1940, and a bomb exploding in the beer vaults underneath Platform 3 on 10–11 May 1941.

On 20 July 1959, a locomotive overran a signal and consequently crashed into Dock Junction Signal Box. As a result, trains had to be hand-signalled in and out of St Pancras for several days.

On 21 March 2012, a SNCF TGV La Poste trainset was displayed at St Pancras. However, regular services proposed for 2017 would use a new terminal planned near Barking.

The tube station pre-dated the mainline as part of the initial section of Metropolitan Railway project on 10 January 1863, which was the first section of the London Underground to open. The station expanded to accommodate St Pancras on opening, following by interchanges with the Great Northern, Piccadilly and Brompton Railway (now the Piccadilly line) in 1906, with the City & South London Railway (now the Northern line) opening a year later. The Victoria line platforms were opened in 1968. A major expansion to accommodate High Speed 1 at St. Pancras opened in November 2009.

A pedestrian subway was built during the CTRL refurbishments. It runs under Pancras Road from the eastern entrance of the domestic concourse to the new northern ticket hall of King's Cross St Pancras tube station (opened November 2009) and the new concourse for King's Cross (opened March 2012).

Retrieved from "https://altcyclopedia.miraheze.org/w/index.php?title=St_Pancras_railway_station&oldid=2780"
Categories:
Hidden categories:
Cookies help us deliver our services. By using our services, you agree to our use of cookies.